We visited the Gullfoss waterfall Iceland in the springtime during our tour of the Golden Circle route. This large waterfall is based on the river Hvita, originating from the glacial lake Langjokull. Gollfoss literally means ‘golden falls’ because of the glacial sediment in the water. This gives the water colour a godlen hue in the sunlight.

Gullfoss is considered one of the world’s most beautiful waterfalls and it is easy to see how it got this reputation. The giant gorges and the powerful crashing water is truly humbling and awe inspiring. As I stood at the viewing platform at the top of the falls, I enjoyed the plunging water and looking down in deep and dramatic canyon below. 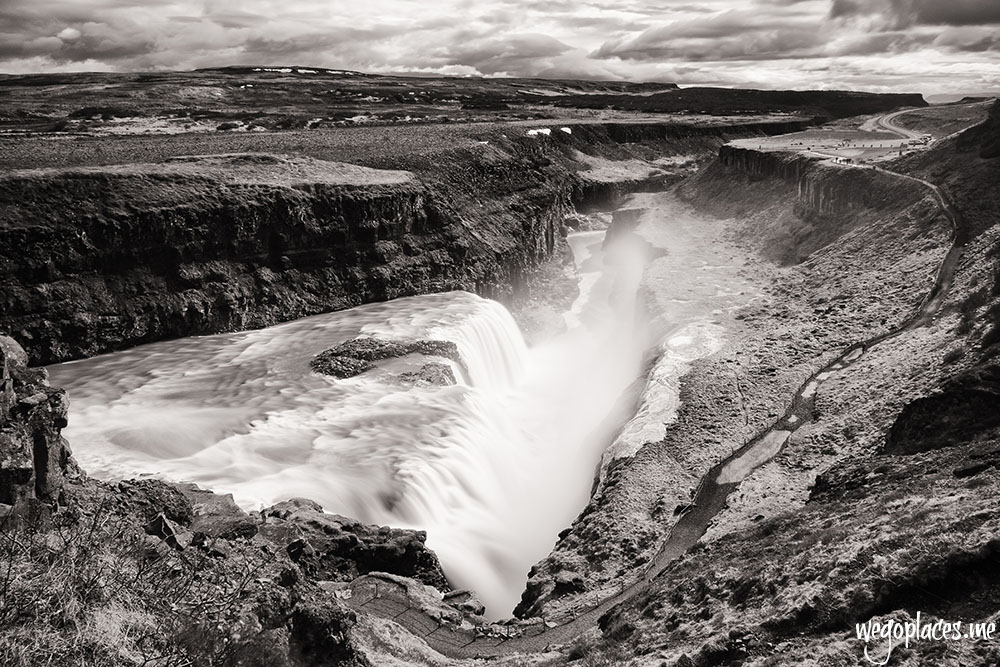 You will notice that this waterfall has two distinct drops in succession along the width of the Hvítá River. The upper drop 11 meters and the lower drop 21 meters. The water spills 32 meters (or 105 feet) in these two steps.

My husband enjoyed taking photos of the stunning views. I recommend that anyone visiting Gullfoss has a camera with them. You might want to take a tripod with you to capture a panorama of the landscape (he took these photos using one).

We stayed at the falls for a good hour but you could probably view the entire site in 15 minutes. Give yourself additional time if you are thinking about walking around the falls. The best part about viewing Gullfoss is that it is completely free and there is no cost to enjoy this natural attraction. 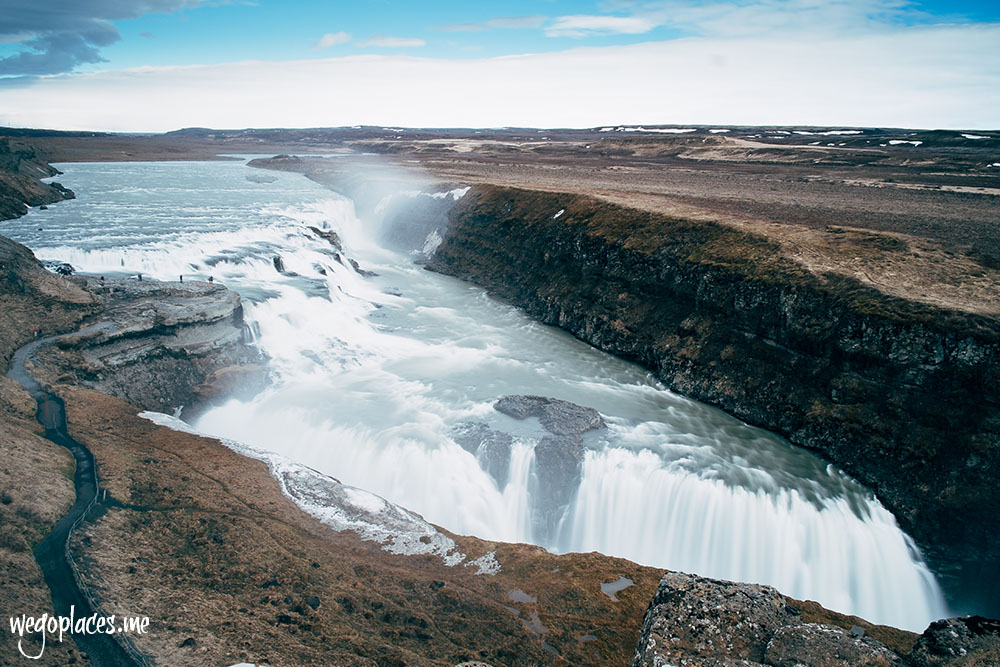 There are different viewing points available to enjoy this waterfall, both above and below. You can view the gorge along the top at an upper viewing point. This platform is on the same level as the gift shop and restaurant. To get a different aspect you can also go down to the lower viewing area, a platform accessible from the bottom car-park.

For those that have less mobility, you can view the waterfall directly from the lower car-park. There doesn’t seem to be a way to view the falls from the other side of the river but this isn’t a problem since there are so many great opportunities on the one side.

You can see a live streaming webcam image of the waterfall here.

During the early 20th century, the land owners of Gullfoss (Tómas Tómasson and Halldór Halldórsso) leased the land to foreign investees who wanted to build a hydroelectric plant here. Their plans fell through due to a lack of funds.

Later on, the waterfall was sold to the state of Iceland. At this time, there was more discussion about using the river to generate electricity.

Gullfoss story: Sigríður Tómasdóttir, the daughter of the landowners, was disappointed about the plans for the waterfall. She was so passionate about Gullfoss that she threatened to throw herself into the gorge and then walked barefoot into Reykjavik in protest. At this time, none of the roads were paved and she showed up to Reykjavik with her feet bleeding. She is credited from saving the falls.

Fact or legend? Although many people accept the story of Sigríður as part of the waterfall’s history, it is actually not true (and indeed a legend of the falls). You will find a stone memorial to Sigríður located above the falls.

Gullfoss waterfall Iceland is located 120 kilometres from Reyjavik (or 75 miles). You can find a map here of where the waterfall is located.

Getting there by car
Starting at Reykjavik, drive about 54 kilometres east along the Ring Road to the turn-off with route 35 on the left. Take route 35 for 68 kilometres to the waterfall. You will pass Geysir (another popular attraction) along the way.

By bus
You can expect to pay about Kr 3400-4000 per person going one way. Bus schedules tend to change quite frequently and their websites are not always up to date. Allow for some flexibility. If you want more independence, then you may want to consider renting a car for the day.

There is a restaurant and shop available here for visitors. This is located at the viewpoint above the falls on the level of the upper car park. You can get yourself a coffee, grab some lunch and use the toilets. The restaurant is known for a delicious lamb stew, bread, wonderful warming soups and chocolate cake.

Gullfoss can be enjoyed at any time of year. However, it is much more popular in the summer months since it gets pretty chilly here in the winter.

Top tip: Watch out for a rainbow when the sun is out that forms in the water spray!

We didn’t take a tour here although there are many tours you can book that go to the Gullfoss waterfall Iceland. Many are by bus or super jeep. Some of these tours will take you to other popular attractions along the Golden Circle Route such as Thingvellir National Park. You can find more activity information on the official Gullfoss website.

—> Jokulsarlon Glacier Lagoon, where giant icebergs meet the ocean (south-east Iceland)
—> Kerið (Kerid) Crater, a volcanic crater lake in South Iceland
—> The Blue Lagoon, a geothermal spa
—> When is the best time to visit Iceland?
—> Guide to the Golden Circle Iceland
—> 9 Exciting Things to do in Reykjavik

PrevPreviousInternational Travel Around the World
NextPhoto of the Week: Graffiti Near Liverpool Street StationNext

3 thoughts on “About Gullfoss Waterfall Iceland”